From Wikipedia, the free encyclopedia

Adansonia digitata, the African baobab, is the most widespread tree species of the genus Adansonia, the baobabs, and is native to the African continent.[2][3][4] The long-lived pachycauls are typically found in dry, hot savannas of sub-Saharan Africa, where they dominate the landscape, and reveal the presence of awatercourse from afar.[5] Their growth rate is determined by ground water or rainfall,[6][7] and their maximum age, which is subject to much conjecture, seems to be in the order of 1,500 years.[8] They have traditionally been valued as sources of food, water, health remedies or places of shelter and are steeped in legend and superstition.[6]

Along the Zambezi, the tribes believe that baobabs were upright and too proud. The gods became angry and uprooted them and threw them back into the ground upside-down. Evil spirits now cause bad luck to anyone that picks up the sweet white flowers. More specifically, a lion will kill them.[15] In Kafue National Park, one of the largest baobabs is known as “Kondanamwali” or the “tree that eats maidens.” The tree fell in love with four beautiful maidens. When they reached puberty, they made the tree jealous by finding husbands. So, one night, during a thunderstorm, the tree opened its trunk and took the maidens inside. A rest house has been built in the branches of the tree. On stormy nights, the crying of the imprisoned maidens can still be heard.[15] Some people believe that women living in kraals where baobabs are plenty will have more children. This is scientifically plausible as those women will have better access to the tree's vitamin-rich leaves and fruits to complement a vitamin-deficient diet.[15]

In villages that formed around the Baobab, the elders would sit under the tree in the evening and invite the community to join them under that Baobab Tree to share stories. In 2014 we planted a Baobab Tree in the 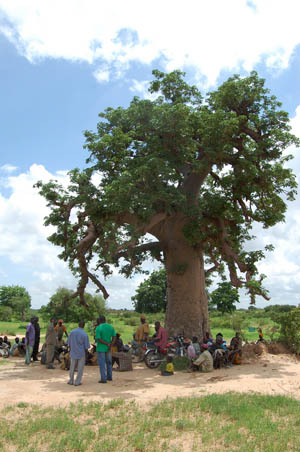 heart of downtown New Haven and we invite you to “come sit with us under the Baobab Tree and let’s share stories.” But we are actually located in a beautiful classic brown brick setting with floor to ceiling windows overlooking the heart of the city’s Ninth Square District. In a studio designed for podcasting, with multiple microphones and an interactive recording booth, we uplift and prepare local voices to reach the global collective digital realm.

Our shows cover topics that are interesting, important, and sometimes life-changing to their audience. We provide an opportunity for real people to share real stories that relate to their real lives. Some of our shows touch on subjects that are controversial, difficult and possibly taboo. We try to reach deep into the hearts of our storytellers and bring out the stories that help to define them and share their stories with the world.

On the other hand, some of our stories are just fun. We encourage our producers to tap into their creativity and look for exciting ways to engage their audiences and share their stories. We present Fantasy, Comedy, Drama and whatever else our producers and host think up. It's all about building community.

Years ago, while working as a Community Organizer in New Haven, CT,  Reverend Kevin Ewing (RevKev)

realized that one of the issues with the world is that people don’t know each other. We don’t know our histories. We don’t know our families. We don’t know our stories. He began to facilitate gatherings where people from all walks of life could gather together and work towards one thing that they all had in common – the place they live/work/play. He noticed that as these very different community members began to work together on a common cause, they talked to each other. And in their talk, they started to tell each other stories. And through those stories the folks began to better understand each other. In a very short time, they learned to get along and even respect each other. So he began looking for ways to promote the sharing of stories. In 2014 RevKev was given the opportunity to launch Baobab Tree Studios, Inc. as a creative space for sharing your story. From that came this  network – Baobab Tree Stories.

Baobab Tree Stories, where we are sharing stories, embracing community, and creating culture. Come join us under the Baobab tree.